NUSTians have proven their excellence, yet again by participating in the Shell Eco-marathon 2018. The Eco-marathon is an annual competition held by Shell plc focusing on energy efficiency. Over 150 teams from 50 countries compete in a bid to design, build and test a car that travels the farthest with the least amount of fuel.

The NUST team also participated in last year’s Eco-Marathon, passing the technical inspection with flying colors. This year’s 28-member team is led by founder, Muhammad Azaan, team manager, Haris Shahzad and the Faculty Advisor, Dr. Sami Ur Rahman Shah, all of whom belong to NUST’s School of Mechanical and Manufacturing Engineering. 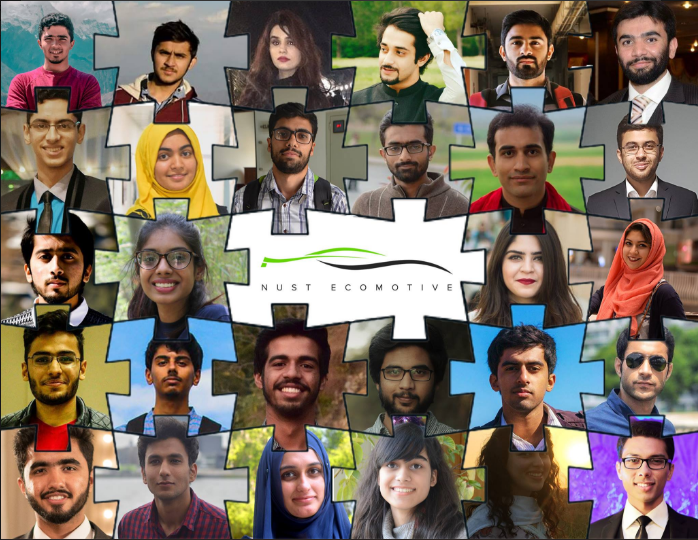 However, to say that Shell Eco-marathon is only for people from the engineering departments would be undermining the scope of the competition. Mishal Shah, a member of NUST Ecomotive’s marketing team and a student of NUST Business School, challenges this misconception. “I, being a BBA student, was able to capitalize the abilities that I didn’t know resided in me before I became a part of Shell Eco-motive.”, said Mishal, “ I’m thankful to Shell for teaching me so much in such a short time.”

The competition is largely divided in to three main parts, with a few off-track competitions held in between. Teams are divided into three regions: Asia, Europe, and America. Within these regions, The Mileage Competition is the first main event that judges the teams upon their efficiency. Over a time period of a few days, teams’ prototypes take laps around a circuit at a set speed while organizer’s measure their fuel efficiency.

The Mileage Competition is followed by The Driver’s World Championship where the test for fuel efficiency is combined with speed. The first three to make it to the finish line get a chance to compete at the Grand Final in Europe where 9 of the best teams from all three regions compete to win the final title.

The NUST Ecomotive team, under the Asian region, will be the first to take on The Mileage Competition and The Driver’s World Championship as the dates are set from 16th to 19th March in Singapore. Morale and hopes run high as the team continues to perform well in the off-track competitions. In early January, the team was awarded 4th place in the Communications Award. NUST Ecomotive was also featured on PTV World’s Morning Show, World This Morning where the team spoke about Shell Eco-marathon, sustainable energy development and how the team plans to succeed in Singapore.

The Deep Web and The Dark Web