Despite the gruesome halt that COVID-19 has put on the world’s progress, every cloud has a silver lining, and we should know that the challenges we put up with today, only make us stronger. With this essence, NMC was back again with another episode of it’s exciting talk show ‘Duniya kay rung, NUST kay sung’.

This session was held on the 19th of May and hosted by our very own Ayesha Shahzad, who enlightened and enkindled us with the accomplishments and achievements of our guest Ms. Faiqa Zafar, a very talented, charismatic, and visionary student of NUST. Faiqa is a sophomore doing her BS in Psychology from S3H and the Co-founder & CEO of MURUNA—’A Women-Empowerment Organization’.

The episode highlighted the cause of MURUNA, the milestones it has achieved till now, the projects it is working on, and the future prospects of what it might grow into. This of course was showered with some light-hearted chit-chat capped off with an interesting session of “Would You Rather…?”

Starting off with a friendly introduction we got to know our guest Ms. Faiqa as an Avid Debater and an MMA trainee. Moreover, when asked about the setbacks the pandemic had brought in her life, she told that even though she was a social person who found it difficult to stay engaged and not interact with other people, she had tried to make the most out of this situation and that this pandemic life had given her the opportunity to start MURUNA along with her sister.

Regarding the complexity of the name MURUNA, she explained that it is an Arabic word for Resilience and flexibility—the motto and vision of her organization. Shedding some light on the cause of MURUNA, she revealed that the purpose of this organization was to empower women to become self-sustainable. MURUNA in her words is not an organization on which people should depend on but rather it serves as an organization that guides women in terms of self-development, raising awareness regarding the problems women face in their daily life, and exploring the means of overcoming these obstacles.

She revealed her motivation behind MURUNA by stating that as she has always been an active volunteer in social and community work since her high school, the idea of running an organization in her own unique way, accounting that no amount of effort can ever be enough in topics of such delicacy, she felt the need for starting MURUNA and giving voice to the unheard.

Our guest also illuminated some of the milestones accomplished by MURUNA which included the positive feedback it received from its audience, the support it gave to another women-empowerment organization in making its first sale, and conducting awareness campaigns regarding hygiene and reproductive health. In terms of present endeavors, she briefed that MURUNA is working on raising awareness regarding Menstrual Hygiene both for men and women. Apart from that, it also plans on visiting underprivileged areas and educating the people on getting vaccinated and why it’s important.

When the question regarding the future plans for MURUNA arose, our guest’s eyes glimmered with excitement as she mentioned a few, the crux being that whatever their resources allowed, towards making this world a more inclusive place for women, they’re on to that. When asked about the approach intended in educating such taboo and sensitive topics, she revealed that the key was being conversational, friendly, and informative at the same time.

This motivational session was summed up with these inspirational words from our guest that “There is no right time for anything, you have to make the right time for yourself.” 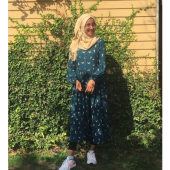